Chalice Island: The rebirth of the Dark Shadows Gothic Horror 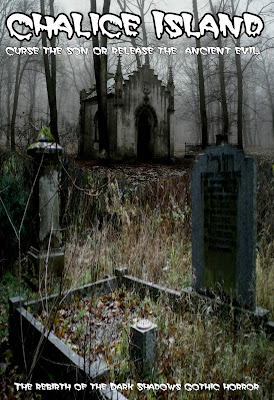 Some of you know that I am a writer and producer who tried to get the DS rights so I could produce a new feature that was more in line with the series. I wasn't able to get them so I edited out the DS and created a completely new project. Chalice Island can't replace Dark Shadows,. But it will continue the tradition with the same kind of suspense, romance, and wicked cliffhangers.

Ignoring the tribal warning, the Cornwall and Hamilton families moved onto an uninhabited island. Their arrogance and ignorance released an ancient evil. Working together with a Shaman, they were able to again imprison it, but in doing so their families became the key to its confinement.

Decades later, before Mildred could stop him, Alberto Stanford broke the seal and swore allegiance to the evil entity. He sealed the pact with her blood. Devastated by their mother's death, Jacqueline and Jackson's grief quickly turned into a murderous rage. Alberto easily manipulated them into blaming a union soldier. Sacrificing him opened their souls to the Master's evil. Mixing their blood with his in the chalice sealed their allegiance. For nearly 150 years they traveled the world, returning each year to perform the blood ritual, which reaffirmed their loyalty. One always needed to remain on the island to maintain control over the family interests and to protect the chalice.

In 1970, it was Jacqueline's turn to stay behind. Claiming to be her daughter, she came to visit her “cousin” Alberto. After faking his death, he and Jackson left. Instead of moving into the Hamilton Manor, Jacqueline reclaimed her parents home. Although, neglected and badly in need of major repairs, she was drawn to the happy memories of her parents. Her dedication to the restoration intrigued Morgan Cornwall. At first, she sent him away. But his playful flirtation reawakened the girl she had been before finding mother's raped and murdered body. In Morgan's eyes, she found the same love she saw between her parents. Her heart began to heal. The first time she chose to stay, Jackson was curious. The second time, Jackson also remained. He needed to know why she had chosen to age normally instead of reclaiming her youth. After meeting Bailey. he understood and he too began to heal.

Suspicious, Alberto returned. In an attempt to regain control, he uses his black magic to terrorizes the island. The evidence trail led first to Jacqueline and then Jackson. Instead of countering with her black magic, Jacqueline hides chalice. She and Morgan run for their lives. Enraged, the Master gives Alberto the length of this life to retrieve the chalice and bring Jacqueline before him. If he fails, he will face the wrath for all three. Before Jackson could escape with Bailey, Alberto transformed himself into Frank and enchanted Bailey into marrying him. Vowing revenge, Jackson leaves.

Working through others, Frank finally finds Jacqueline and Morgan on a small Reservation. Over the decades, she has earned grace. As long as she refrains from using her powers, she will remain untouchable. Yet, Frank knows her true weakness. His first attempt on her children only served to make Jacqueline more obsessive and controlling over their safety. Her smothering made her son angrier and more resentful of being confined to the Reservation.

As the clock winds down, Frank sends the vampire that he created to bring her son to Chalice Island. Jacqueline and Morgan return to find the past has not been forgotten or forgiven. Frank demands that she return the chalice. If she returns it, he will release the ancient evil. If she refuses, her son will become a vampire that she will either have to kill or force him to live in eternal confinement. If she uses her power to save her son, she forfeits her grace, erasing her life with Morgan, their children, and all the good she had done.

Jackson remains the wild card. Only Bailey knows he has returned. Which side will he take or does he have an agenda all his own.


Posted by Theresa Chaze at 7:13 PM No comments: