Should television make a profit?

As the creator and Executive Producer of Horses and Heroes, I need to clarify the purpose and parameters of Horses and Heroes. It has never has been a non-profit company. Horses and Heroes combine equine therapy with peer support therapy to create an unscripted TV series that will empower veterans to reclaim their lives. Each season, eight veterans will come together with the hosts, Craig Sawyer and Tim Abell along with the Therapists on the hosting ranch and the team therapist, Dave Ferruolo. They will work together to identify and address their core issues. Unlike most in the genre, Horses and Heroes is all about healing and forward movement. Yesterday, I was accused to trying to make a profit off others' pain. The owner of a ranch said, "It is immoral to capitalize on the recovery of our wounded veterans." I debated with myself about how to or if I should address this accusation. Staying silent and letting it slid would only add credence to her charges.
Horses and Heroes is a production company that's sole purpose is to produce the unscripted TV series, Horses and Heroes. It is a for-profit company that is looking for equity investors and a corporate cross-branding partner. Although we wouldn't turn down donates, we are not actively seeing them out. Investors, expect and deserve to make a profit on their investment. That is why they invest. The corporate partnership with television programming has been around since the beginning of television. Texaco Star Theater and Mutual of Omaha's the Wild Kingdom are only two examples. We are offering an updated and active version of what was done before.
As for the morality of making a profit off the pain and recovery of others, the same could be said of everyone in medicine from the janitor to the CEOs, lawyers, drug manufacturers, including those who do the research, those in the funeral industry--all of them and more make a profit of the physical and emotional challenges of others. If they didn't, they wouldn't be able to donate to the non-profits such as this ranch.
We will be hiring veterans for both in front of and behind the cameras. We will be paying a fair wage plus covering the travel, housing, and food expenses during the production, including for the eight veterans going through the therapy on air. The ranch will be paid a sizeable location fee as well as receiving a great deal of promotion. After the show. we will be arranging aftercare for the veterans who went through the therapy. Everyone wins, especially those veterans, who watch the show and seek help afterward.
Website

Posted by Theresa Chaze at 12:51 PM No comments:

Facing Your Fears and Achieving Your Dream 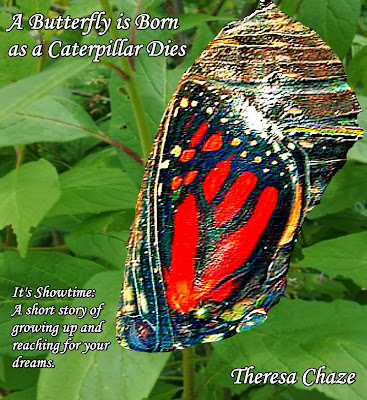 A Butterfly is Born as a Caterpillar Dies gives aid and comfort to those, who are going through life's transitions.
For there to be a beginning, there needs to be an ending. The end of the day is the beginning of the night. Night's end begins with the new dawn. From childhood through the end of life, change is inevitable. How we choose to react will open or close doors. But not always in the ways we expect or want. Even when we chose to make the changes, the excitement intertwines with apprehension as we walk through the threshold into unknown. Some people we meet will help and support you. Some will challenge you. But each of them will play an important role in helping you learn and grow.
This is the lesson Shylon learns. She awakes in her egg. At first, she is afraid. But quickly realizes that she is safe and secure in her own little world As she starts to outgrow it, the feeling of security is replaced by fear of loss. When a piece of it falls away and she sees the world beyond, her fear intertwines with amazement and curiosity. The harder she tries to stay in her egg, the faster it falls away. She has no other choice than to release the past and follow her destiny.
Available as a PDF by clicking here website Available as a Kindle by clicking here
Available as a paperback by clicking here

Posted by Theresa Chaze at 1:22 PM No comments: