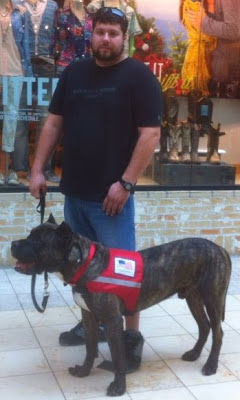 I'm asking everyone to help make a difference for this vet and his dog.  Please call and protest.  Dutch was protecting himself.  What I would like to know is why the attacker, the person who was beating Dutch, hasn't been arrested and prosecuted?


An Army Veteran with disabilities is asking for the public's help in saving his service dog, Dutch, from court-ordered euthanasia. After being punched, kicked, and hit with a metal pole for several minutes, Dutch bit his attacker and has now been accused of being a "vicious" dog.

Dutch is a 4-year-old American Allaunt, who is a registered service dog and an important part of Jeremy Aguilar's life. According to the Aguilars, Dutch has never shown any aggressive behavior before or after the incident and is a certified AKC Canine Good Citizen.

Jeremy served in the Army, and fought in Operation Enduring Freedom in Afghanistan and Operation Iraqi Freedom. He also was also deployed to Hurricane Katrina with the Oklahoma National Guard, which was the first unit to show up. Dutch came into Jeremy’s life a month after he married his wife Heather three years ago. Heather says that Dutch has been "the most therapeutic thing that could have ever happened" to her husband.

To read the rest of the article go to:
http://www.dogheirs.com/dogheirs/posts/2744-disabled-veteran-asks-for-public-support-service-dog-faces-euthanasia-for-biting-woman-who-beat-him-with-metal-poles

Here is the contact information that I found for Montrose CO Calling and or sending a hand written snail mail letter will do more good than signing an online petition. They are taken way more seriously.

The Municipal Court is the judicial component of the three branches of Montrose City government.

The City Council appoints the Municipal Judge and Assistant Judge.

All Court sessions are open to the public and are held every Thursday in the City Council Chambers at the Elks Civic Building. The current Municipal Court docket provides a list of cases that are to be heard during the next court session. The court docket is updated on Monday of each week, except on City-observed holidays.

" Instant Karma is going to get you."
John Lennon
Have you ever met someone and suddenly  felt love or hate? Yet for the life of you couldn't remember meeting  them before. Did you wonder why? Would you want to  remember? Would you want to know if it could save  your life? ? Never Can Say Good-bye is a paranormal thriller  feature film with the  logline love and hate survives death

The goal is to create quality movies that people want to watch. Many have reduced the industry down to a formula.   People aren't that simple; they can't be reduced down to a balance sheet. Described as a woman who has the courage to play with dragons, Theresa Chaze has gone where fools and angels fear to tread and has flourished. Her site is at www.theresachaze.com
Courage isn't the lack of fear, but the ability to set it aside and  focus on what is truly important
Posted by Theresa Chaze at 1:06 PM